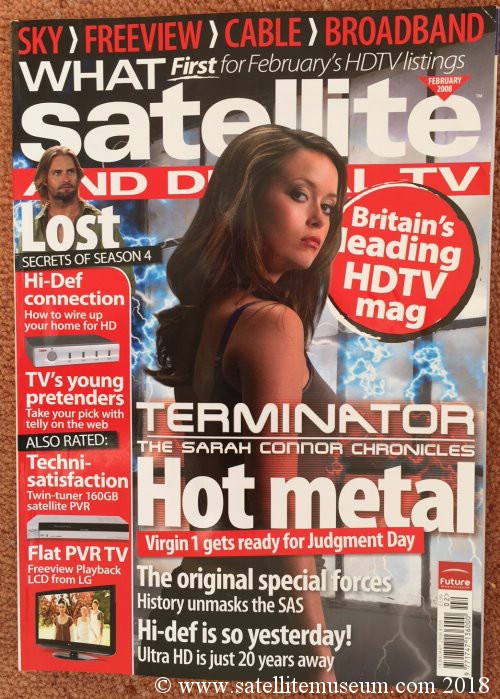 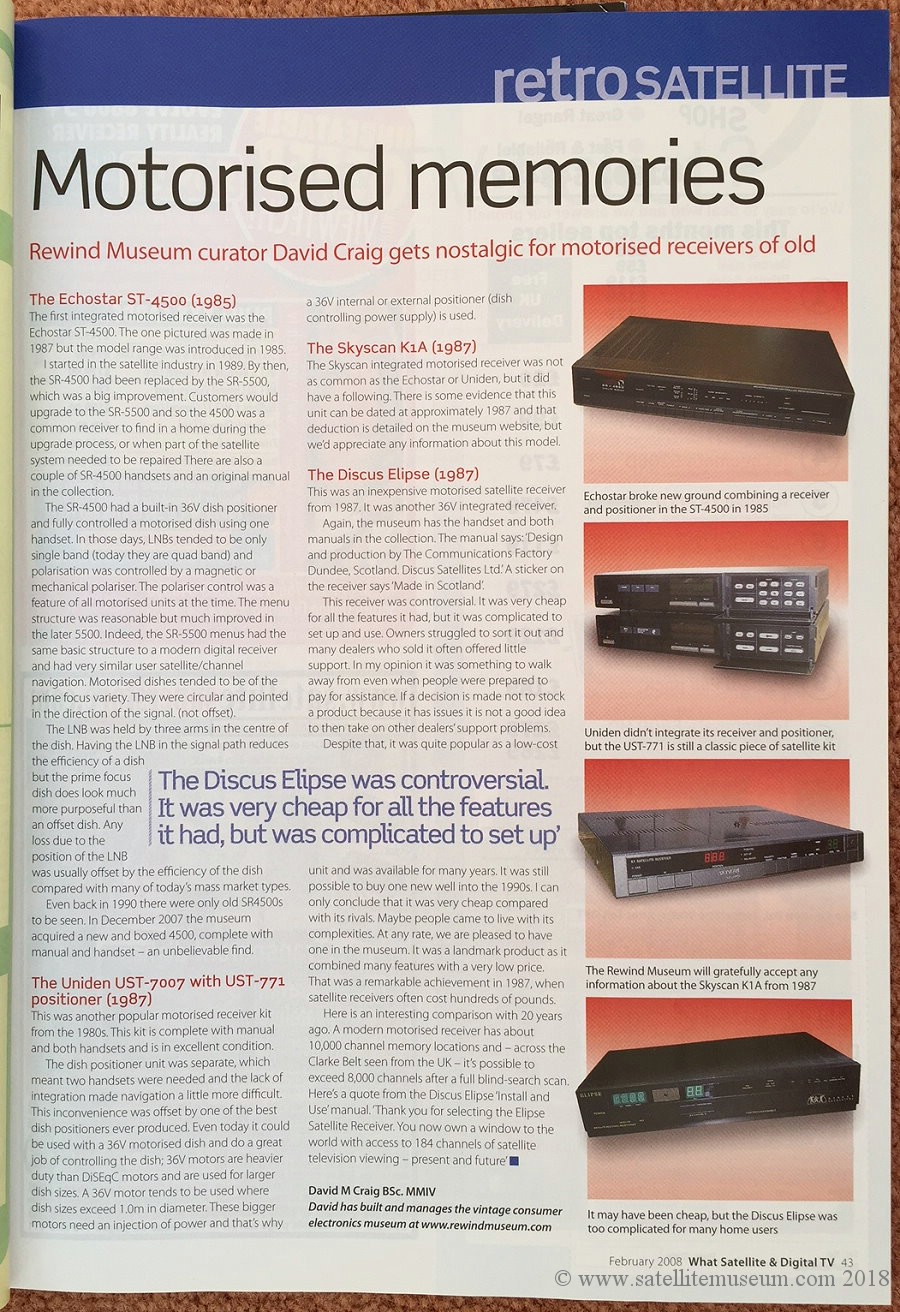 This article was one of a series of articles I wrote for "What Satellite" magazine in 2008. More articles below. 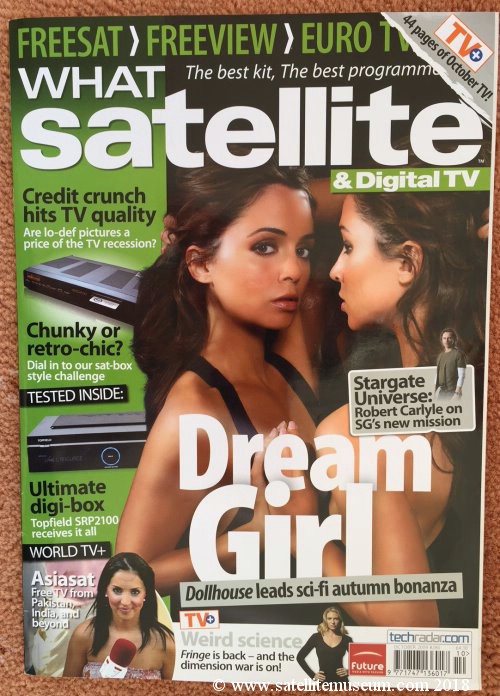 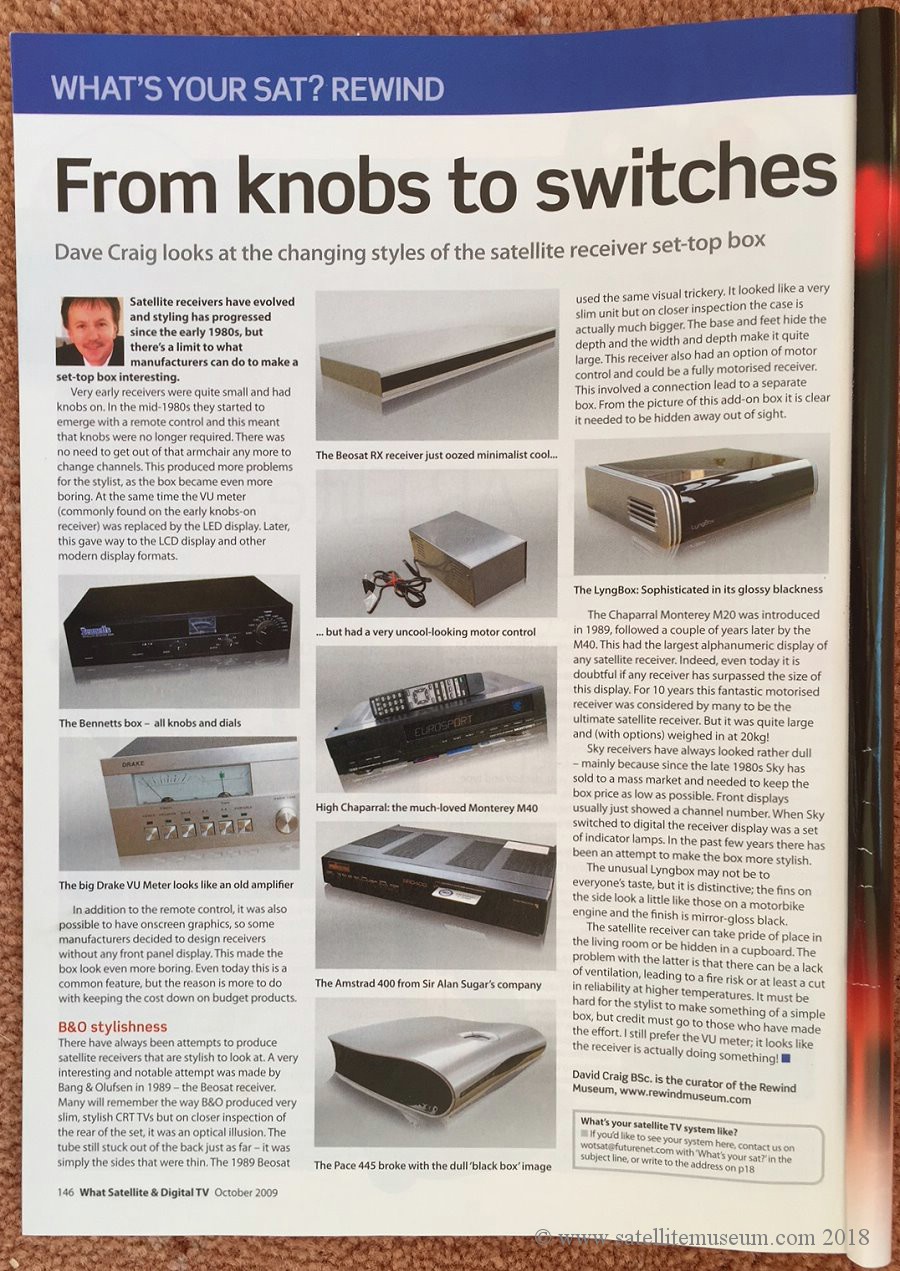 This article was one of a series of articles I wrote for "What Satellite" magazine in 2008. More articles above and below.
At some point in 2008 What Satellite decided to include my picture in the articles. I supplied a picture taken in 2006.
All I can say, now in 2018 is, I wish I still looked as good as that! 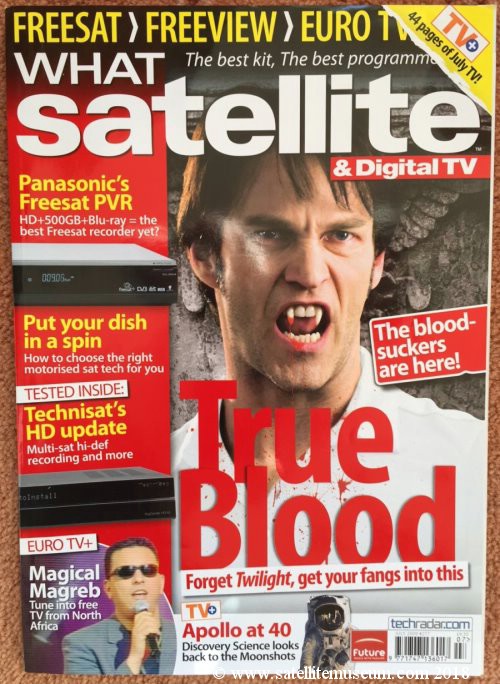 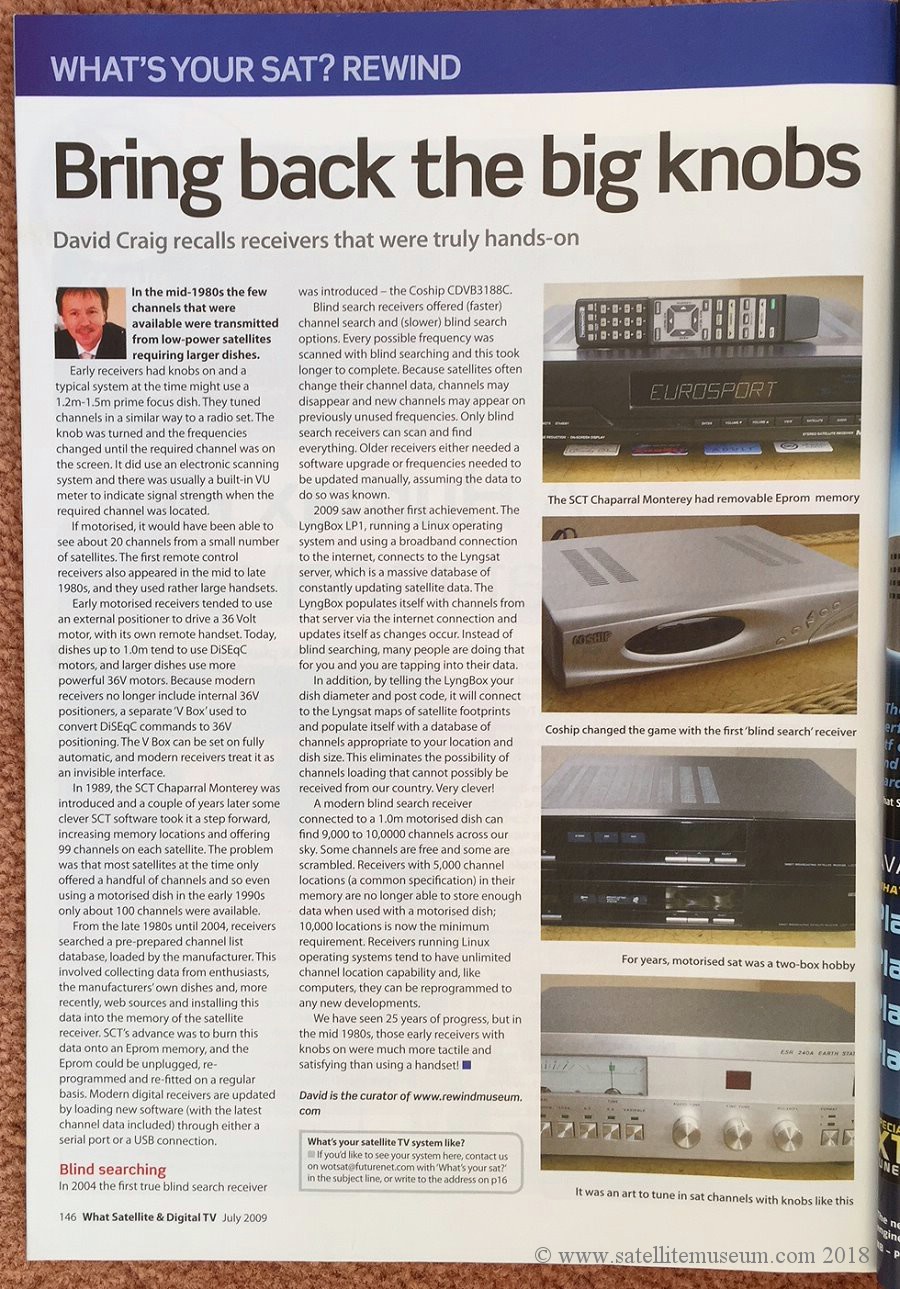 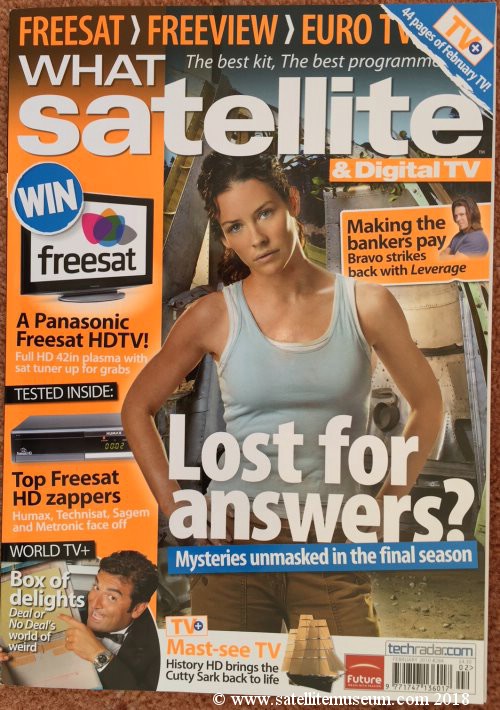 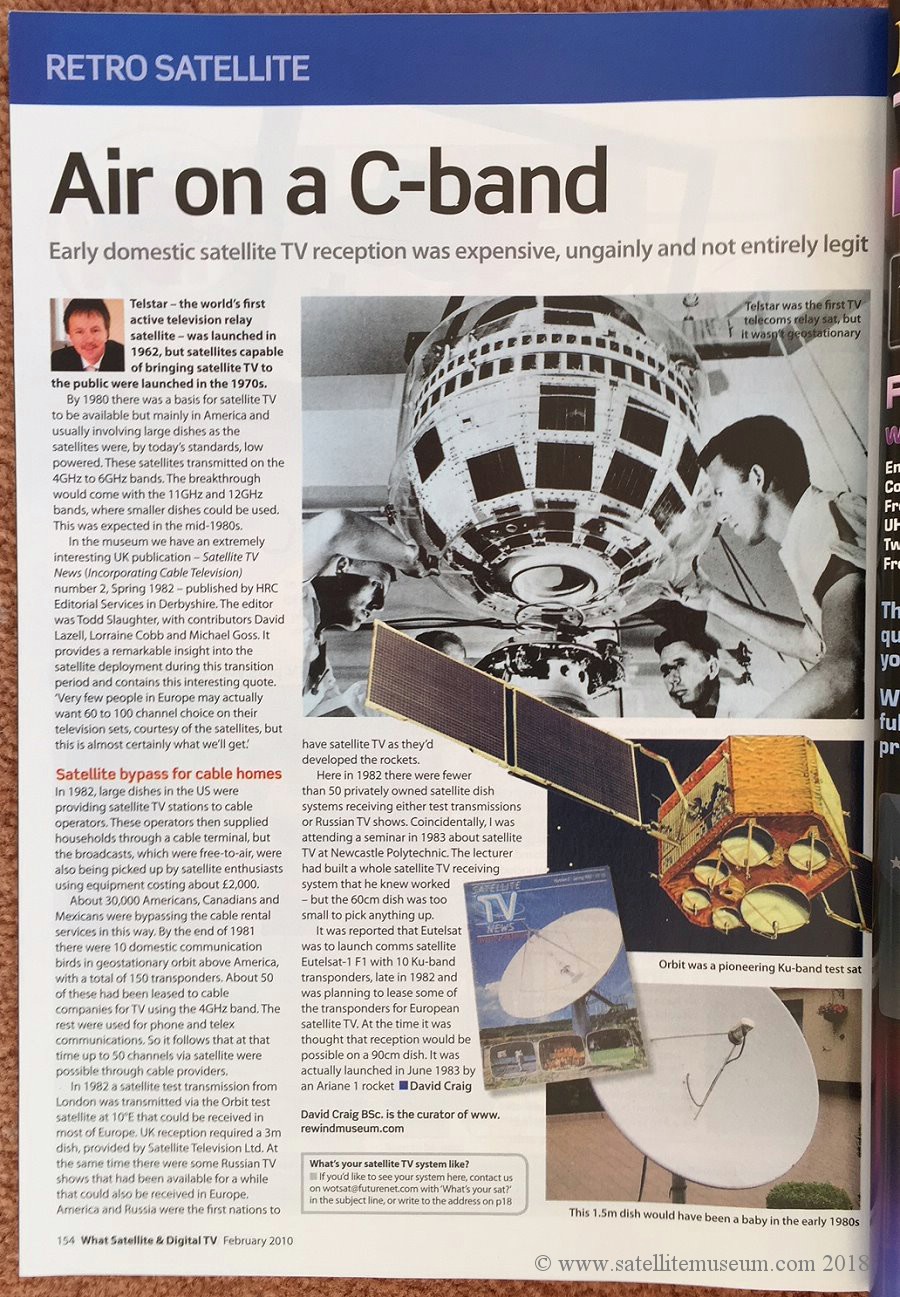 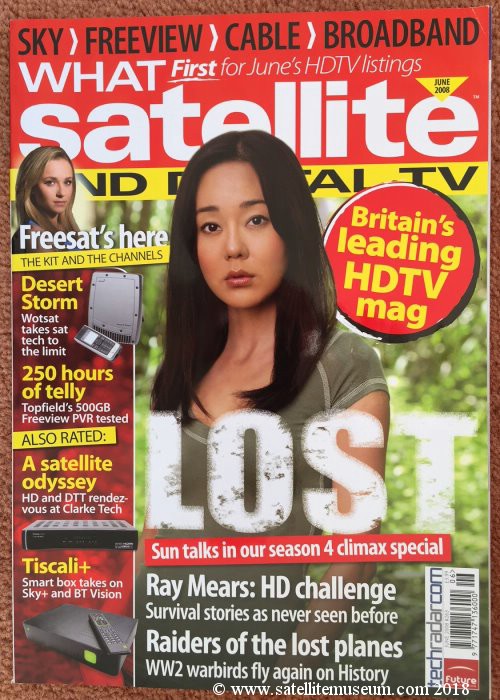 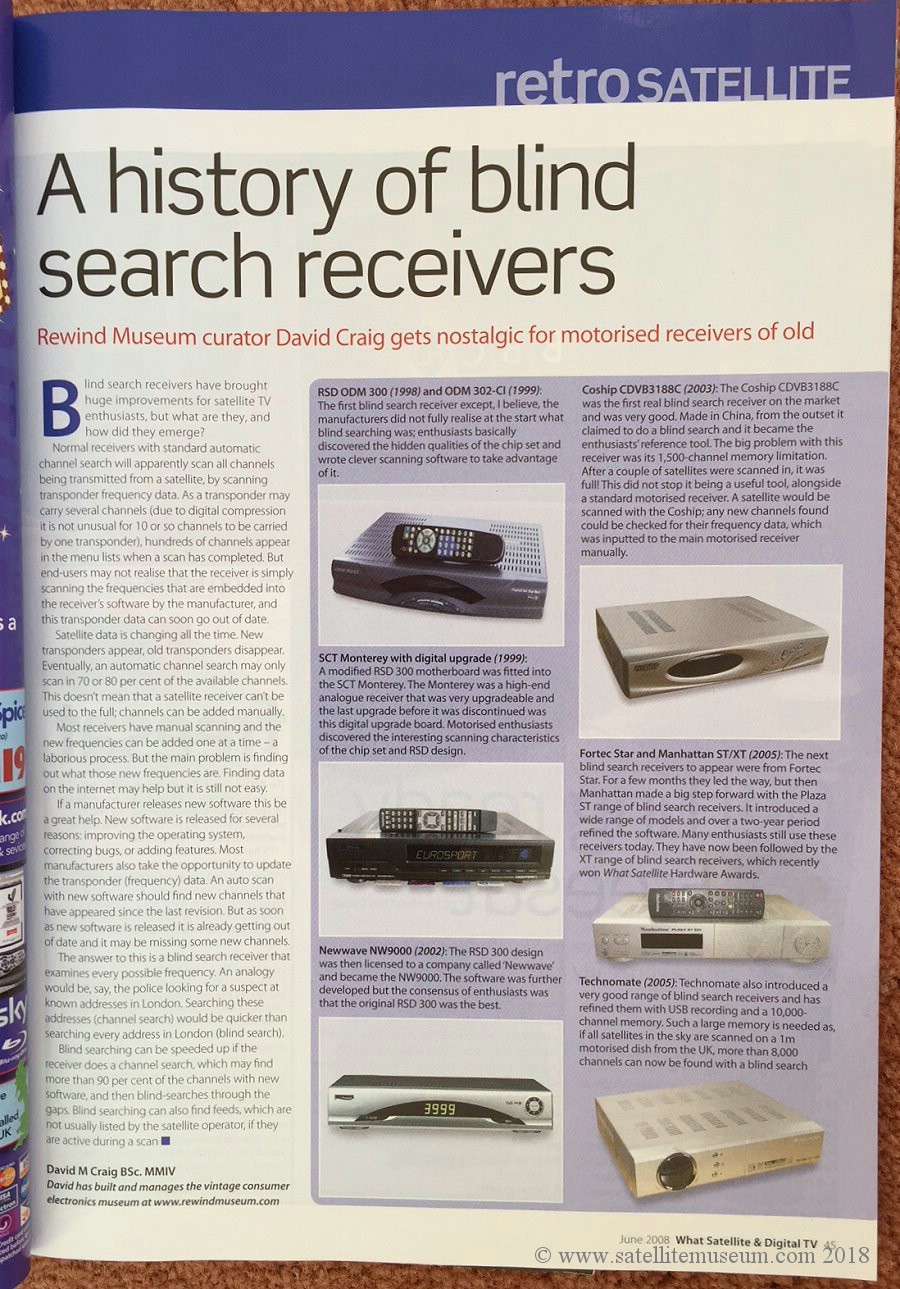 I found my original notes for this article. I did not keep the magaziine. -

“Back To The Future” with C Band. 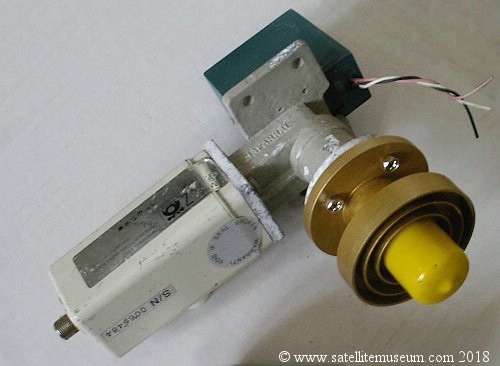 To deal with two of these bands, initially two LNBs were used using an OMT wave guide. Here, the two LNBs might
have been FSS and Telecom or FSS and BDS. The signal coming into the feedhorn split using an OMT waveguide to
the two LNBs. The LNBs were switched using a 12 volt switch built into the satellite receiver. Two coaxial
cables were needed between the two LNBs and the receiver. LNB selection was either on a per channel basis
or a per satellite basis in the receiver’s menu structure. In the early 1990s, triple band LNBs were
introduced covering all 3 bands. This was one LNB block with two LNBs inside it, one LNB for the FSS band
and one LNB for the DBS and Telecom bands. Only one coaxal cable was used. This system used 13/18 volts to
switch between bands (LNBs) and a magnetic or mechanical polariser was used to control polarity. This
polarity control required an extra cable from the receiver, 2-core for magnetic and 3-core for mechanical.
There was only one sensor in each LNB. The magnetc polariser turned the incoming wave through 90 degrees
for vertical and horizontal channels. The mechanical polariser actually turned the sensor through 90
degrees. Triple band LNBs did not last very long as it was discovered a further small sub band was
available from 10.700 – 10.900 GHz. Fixed dish consumers using a single band (FSS) voltage-switching
LNB could now buy an “enhanced” LNB that went down to 10.700 GHz. The enthusiast, usually with a
motorised dish, could buy an “enhanced” triple band LNB. This was now called a “block type quad band”
LNB (still using a polariser). 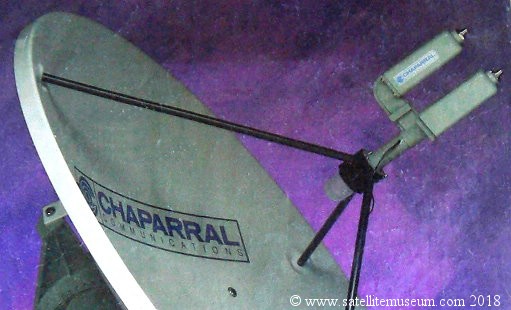 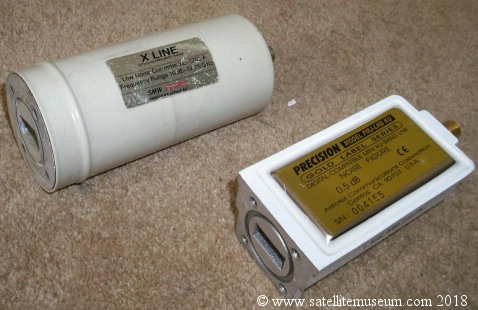 In the mid 1990s, the “Universal LNB” was developed. This was basically a quad band LNB covering the same
bands as the quad block type, but was operated in a simplified way. Instead of using mechanical or magnetic
polarisers to switch between vertical and horizontal polarisation, it used two sensors in the feedhorn
wave-guide that were positioned at 90 degrees to each other. One sensor was for vertical channels and
one for horizontal channels. Polarity switching was achieved by switching to the appropriate sensor
using 13 / 18 volts all on one coaxial cable. A second polariser cable was no longer needed. The band
switching was done by a 22 KHz tone through the same coaxial cable. This is the main type of LNB that
is used today. That is not, however, the end of the story. The 4 bands from 10.700 – 12750 GHz are
called the “Ku band” but C Band still exists and enthusiasts with larger dishes enjoy C Band
transmissions. These transmissions elude many motorised enthusiasts as C Band needs larger dishes which
many of us cannot deploy due to planning regulations (or a partner that would find them unsightly!) 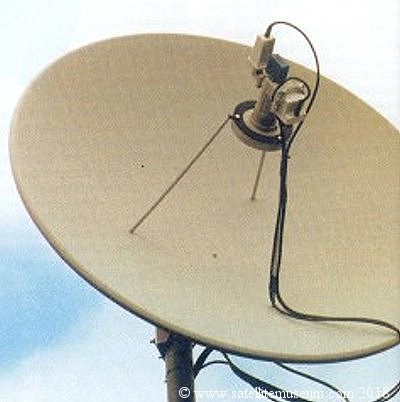 There were two ways of receiving C band. C Band only - use a C Band LNB on a C band feedhorn, or C band
and Ku Band - use a “Co-rotor” with a block type quad band LNB and a C Band LNB fitted to it, using a
common feedhorn, mechanical polariser, two coaxial cables and an extra 3 core cable. Complicated,
expensive and with an insertion loss. Either way, prime focus dishes needed to be used as only prime
focus C Band feedhorns were available. (A prime focus feedhorn has “scalar rings” to reduce “noise”
using destructive interference). 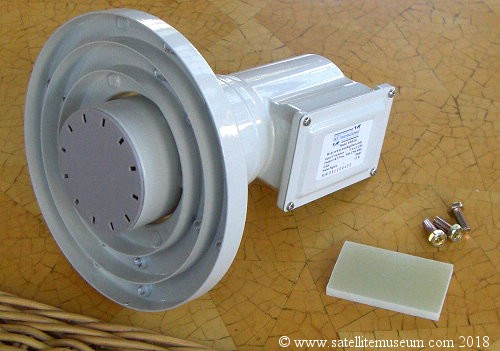 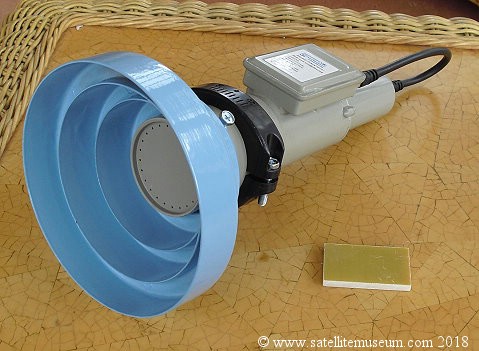 In 2010, new LNB technology became available : a new C Band LNB with both prime focus and offset feedhorn
options. (Many dishes today are offset types). This LNB uses voltage switching for horizontal and vertical
polarisation control (like a modern LNB). Also introduced, and even more exciting, is a new C band and Ku
band (universal) LNB, again with both prime focus and offset feedhorn options. The C / Ku band LNB uses
modern Diseqc switching control to switch between C Band and Ku band LNBs. The Ku band LNB is a universal
LNB. This innovation meant that everything could be controlled down one co-axial cable by a modern
SD or HD satellite receiver.

Large dishes are still needed for C Band. 1.8m dishes will work for some channels but a 2.4m dish (or larger)
pulls in a significant number. These new LNBs make everything much easier, are not expensive and they work
with modern receivers. C Band was the start of satellite TV and it is now available with new improved
technology for the enthusiasts with larger prime focus AND offset dishes.

David M Craig BSc.
David is the curator of www.satellitemuseum.com

This article was one of a series of articles I wrote for "What Satellite" magazine from 2008-2010. More articles above.

The satellite Museum is a non-profit making endeavour. The web site and the touring exhibitions are run on
a voluntary basis. Donations, not money, just old items you no longer want, are always welcome.
If you have something that you think would be of interest, please contact us with the details.
We can send in a courier to pick them up. (Even an international courier). Thank you. 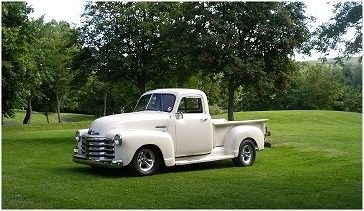 Interested in an extra 8000 channels? Watch the world? Links to some of the popular pages are below,

The satellite Museum web site is maintained on a none profit
making voluntary basis. Our main business website is at
www.satellitesuperstore.com/cat.htm
Our main business is satellite TV and we are a specialist satellite company.
We supply satellite goods in the UK and worldwide including fixed and
motorised satellite systems, accessories and installation equipment.

Web site copyright © 2009 Vision International. All rights reserved.
For all questions & comments about this site's content contact Dave at satellite
Museum (We only accept questions in English. We do not open attachments.)